Contains all of the configuration for cargo deny check bans

Determines what happens when multiple versions of the same crate are encountered.

Determines what happens when a dependency is specified with the * (wildcard) version.

If specified, alters how the wildcard field behaves:

Being limited to private crates is due to crates.io not allowing packages to be published with path dependencies except for dev-dependencies.

When multiple versions of the same crate are encountered and multiple-versions is set to warn or deny, using the -g <dir> option will print out a dotgraph of each of the versions and how they were included into the graph. This field determines how the graph is colored to help you quickly spot good candidates for removal or updating. 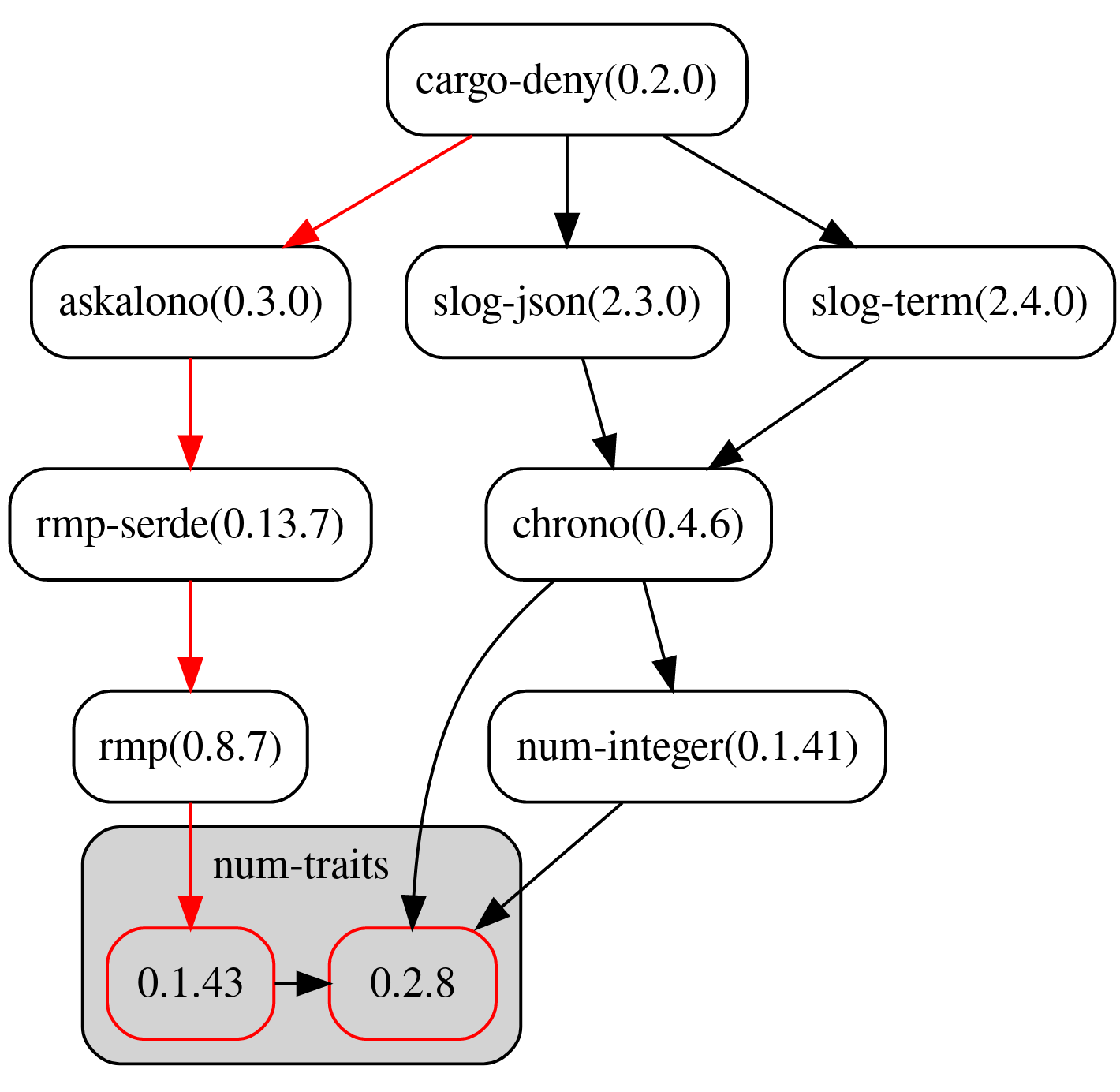 The allow, deny, features, skip, and skip-tree fields all use a crate identifier to specify what crate(s) they want to match against.

The name of the crate.

An optional version constraint specifying the range of crate versions that will match. Defaults to any version.

Determines specific crates that are denied.

This field allows specific crates to have a direct dependency on the banned crate but denies all transitive dependencies on it.

Determines specific crates that are allowed. If the allow list has one or more entries, then any crate not in that list will be denied, so use with care.

Determines the lint level used for when the default feature is enabled on a crate not in the workspace. This lint level will can then be overridden on a per-crate basis if desired.

For example, if an-external-crate had the default feature enabled it could be explicitly allowed.

The workspace version of external-default-features.

Denies specific features for the crate.

Allows specific features for the crate, enabled features not in this list are denied.

If specified, requires that the features in allow exactly match the features enabled on the crate, and will fail if features are allowed that are not enabled.

When denying duplicate versions, it's often the case that there is a window of time where you must wait for, for example, PRs to be accepted and new version published, before 1 or more duplicates are gone. The skip field allows you to temporarily ignore a crate during duplicate detection so that no errors are emitted, until it is no longer need.

It is recommended to use specific version constraints for crates in the skip list, as cargo-deny will emit warnings when any entry in the skip list no longer matches a crate in your graph so that you can cleanup your configuration.

When dealing with duplicate versions, it's often the case that a particular crate acts as a nexus point for a cascade effect, by either using bleeding edge versions of certain crates while in alpha or beta, or on the opposite end of the spectrum, a crate is using severely outdated dependencies while much of the rest of the ecosystem has moved to more recent versions. In both cases, it can be quite tedious to explicitly skip each transitive dependency pulled in by that crate that clashes with your other dependencies, which is where skip-tree comes in.

skip-tree entries are similar to skip in that they are used to specify a crate name and version range that will be skipped, but they also have an additional depth field used to specify how many levels from the crate will also be skipped. A depth of 0 would be the same as specifying the crate in the skip field.

Note that by default, the depth is infinite.

NOTE: skip-tree is a very big hammer at the moment, and should be used with care.